Does anyones child have KP?

Question for all of the moms with children that are a little bit older. Has anybody had a child with KP? If so, did they pick them/try to pop them? My son is tearing up his arms doing this, and I don’t know how to prevent it. I try to watch him as much as I can and call him out when he does it, but if I’m not looking for a few minutes, he’ll start picking at them.

Help a mama out and respond anonymously on our forum. Does anyones child have KP?

How old is the kid maybe try this works for me

U can get it on Amazon

Not my kids, but I have it primarily on my legs. It’s hard as hell not to pick and scratch. Cetaphil helps.

I never really knew it was a thing, but I have it. It’s pretty prominent on my arms and thighs.
Never really popped it though…

We had a conversation with our dermatologist just today about this. She recommended the over the counter Differin gel a few times per week and she recommended one of those electronic spinning facial brushes a few times per week (sensitive bristles) and a good Lipikar balm at night. She said kids with this have sensitive skin so be careful not to irritate it too much.

Unfortunately you can’t make him not pick but these options may help smooth the skin. Hope this helps.

Use Amlactin lotion recommended by dermatologists.

I have it myself and I went through a time of picking at my arms but honestly I don’t have any marks where I messed with them and my arms look 100% better now it cleared up on its own.

My stepdaughter has it and her arms are all scabbed up like crazy because she will not leave them alone.

I’m assuming you’re talking about keratosis pilaris. Take him to see a dermatologist. He may think they are pimples but they aren’t. He is doing more harm than good by “popping” them.

My oldest has kp. We use CeraVe rough and bumpy skin unless it’s an especially bad outbreak, then we get stuff from the dermatologist, hers seems to be linked to allergies, our derm said wheat/dairy allergy kids tend to have more of a prevalence of kp.

My daughter & I both have it, her pediatrician suggested this

Does it typically bother y’all? Like hurt or itch?
Every now and then I catch myself scratching it but not deliberately picking at it.

This is the only thing that made mine go away, and stay away for a long long time. My pre-teen daughter is dealing with it now.

My 3 year old has it. I wash her with cerave sa renewal cleanser and then use amlactin lotion on her. You can use a mild exfoliator on it as well

My son and I both use Cereve Rough and Bumpy but I will say when we watch our gluten intake it does significantly improve as well.

My daughter does. She uses these.

I didnt even know this had a name. Iv just exfoliated mine and its gone alot better x

My son does and our pediatrician dermatologist told us to have him was with cera be bar soap and when he’s out of the shower to use cera ve cream. NOT the lotion in a bottle but the actual cream in the tub.

my son has kp, we found what flares his up and we try to limit it! nothing really helped his topically.

I sell a polishing bar that clears keratosis pilaris. If anyone is interested in info, please let me know!

Yes! We use this. I use an exfoliating brush also but it’s too rough for my kids, works well for me though. 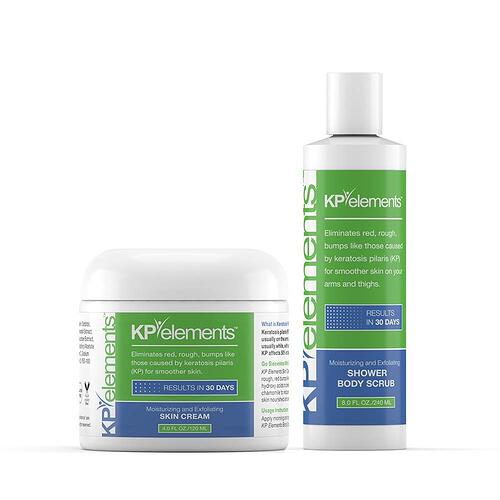 I used to have it and picked at my arms incessantly. It didn’t hurt, but eventually it did go away. I do remember my dermatologist recommending hydrocortisone cream.

Cetaphil Restoraderm body wash and lotion helps clear the KP up. My daughter has it and me. The picking can be an anxious/obsessive habit. Definitely look into that if he starts scarring etc. I know it sounds crazy but need counseling to help find other things to do besides pick. Also amlactin the strong version on target website etc. Not the daily one the stronger one also helps. Get all 3 and use daily!

KP Duty from DERMAdoctor works like magic!! Use the scrub first and apply lotion after rinsing off scrub. You will see a difference after the first use. I used it twice a day when I first got it bc my KP was bad (at least to me it was) and it cleared up in no time. This stuff is amazing!

Keep him covered in cream thick cream, and bath him in oats they say to put it in some tights and let’s the water run thru it and bath him in that seeing it helps him with the itching, and put mittens on him lol

I know it’s hard mom but if I were you I would try different products like exfoliating scrub,creams and or different body soap no fragrance and make it a daily ritual so maybe if he sees it’s helping he can re train his mind to know it’s getting better if that makes sense maybe he’ll go get his cream before scratching & or picking it’s only an idea my daughter was a picker and I did it and now it doesn’t even phase her anymore

Help a mama out and respond anonymously on our forum. Does anyones child have KP?

I have it I’m 24 and still do it . There’s certain lotions you can sue after exfoliating like amlactin to help it but it’s genetic

I have it but I just leave it alone. I don’t put lotion or special soap on it. i do exfoliate in the shower but it doesn’t help or hurt it. I’ve never really cared about it tbh

My 3year daughter and I both have kp. We use the Goldbond rough and bump skin. It works great.