My fiance is overly protective about my pregnancy: How can I calm him? 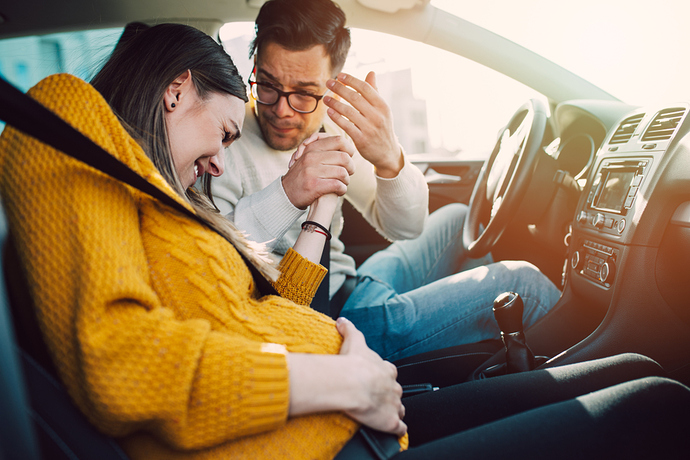 I need advice I just found out I’m pregnant with my 4th. I’m a little scared but nothing unusual, however, this is my fiances 1st, and he’s a wreck. He’s stressing me out already he’s trying to change everything now I understand some things have to change. Still, he’s acting like he’s going to wrap me in bubble wrap and not let me move the whole pregnancy what some ways I can try to comfort his worries and assure him I can still do certain things are.

Take him with you to ob appointment and let the Dr reassure him that you’re healthy and capable of doing things.

I think the fact that it’s your fourth, he should realize you know what you can and can’t do from the other three pregnancies. Just remind him this isn’t your first pregnancy and you’ve got this

Awe. Coming from the opposite of this… enjoy it for a bit. Not every man is this protective.
Just reassure that you can snd will do certain things. Doing absolutely nothing is just as bad as doing too much!

Explain to him that pregnant women aren’t handicapped. Take him to an ob appointment if you can and let the doctor explain what limitations you have so he understands. Unless you high risk you can usually continue what you did before pregnancy as far as working, exercising, ect. Staying fit and maintaining muscle tone during pregnancy is actually very important because it helps you tremendously during labor.

Maybe he’s has a loss before and doesn’t know how to show he cares. Communication is key before you think he’s just trying to control. I have a friend who suffered a pregnancy loss and it still affects him, he really wanted that baby even though they broke up and is no longer with her it’s still sad. He got mad at his GF too who actually had his baby now because he didn’t understand some things, but just communicate and yeah Dr appointment if at all can help.

Remind him you’ve done this 3 times before and you’re fine. Tell him to back off alittle.

Hes just excited an nervous. Maybe have a sit down an have a deep conversation. Your 4th means you know what your doing. Eventually he will get it I’m sure. But it is understandable.

Tell him this ain’t your first rodeo and he needs to calm down. You’re not fragile, sick, or broken, you’re just pregnant!

Talk to him see what he might be afraid of

Maybe he can listen in on a phone call to your ob as many places aren’t allowing more than one person in at a time?x

Call ur ob and have him talk to him. Inform ur fiance that it’s ur doctor and that he can tell him what u can and can’t do. And when you do something ur not meant to be doing he can say something to u

Girl, I’m on my 4th as well and my husbands 4th, and he is almost doing the same lol. He won’t let me lift heavy stuff or carry the kids. But I’m enjoying it. I finally get to relax

Im like this myself when I am pregnant and Ive had 2 kids, even with friends. I just got on my beat friend for trying to walk a few blocks in a 105 degree weather while 24 weeks prego… just let him help you, dont feed into it, and have the doctor talk to him about does n donts during pregnancy. My bestie just lets me talk and help. She understands I care and worry without feeding into my craziness

Please make it special for him. And although you can tell him to trust you, don’t say “I’ve done this 3x already” as it will diminish the special moment. I’m telling you from experience. Just be patient, educate him, and let him be your protector

I don’t think I have any advice.
I just have to say your a better woman then I, cause man that would get on my last Nerve so fast that it make your head spine. That and I’d be telling him not so nicely to bugger off. Lol

Tell them basically the golden rule. “If you did it before you were pregnant” you can do it while your pregnant. Aka if you ran 5 miles a day. You can still do that. Obviously this rule doesnt apply to things like drinking and such but its a good rule of thumb for everyday activities.

It may not be your first but it is his. Go back to when you had your first. Your feelings worries an thoughts. How did your support around you try to comfort you an help you? Lots of blogs are good to follow. As others stated. Try to have him at any appointments hes available so the doc can assure him of his concerns an worries. Your first is a magical time but makes you a nervous wreck hahaha. Its understandable an it’s also annoying as hell. I get where your coming from. Just try to research things together an talk. Actually talk get him to tell you what an why so you can approach it better an on gentle terms for him etc. Good luck an I wish you the best:)

Get some books to read together.

Shoot enjoy it. Lol no lifting over 5 lbs so no laundry no grocery shopping, it could be fun. I wish hubby had been protective, instead all four where like I wasn’t even pregnant in his eyes.

Well tell him its number 4 and you got this. Tell him to be there when you need him. Talk it over with him as well if he I’d stressed about your pregnancy.

This is sweet. Take it as a blessing. If some things get a little out of hand just be honest and talk to him. Sounds like you have a good man, and will be an even better father. My daughters dad was similar. He didnt smother me but always tried to do everything perfect for me. Goodluck

Buy “What to Expect when you are Expecting” and read it with him. It will assure him that most of what you are going through is normal. And if you experience other things have him go with you when you see your doctor to ask questions.

Please do not tell him “I already did this 3 times” That’s basically telling him you don’t need his input. It is his first child and it’s very special for him. Most men don’t act loving and protective like him. If you don’t like him overdoing it have conversations reassuring him that everything will be ok and just try to be patient with him.

The doctor told me when I was pregnant to put much just continue on with my everyday activities as long as pregnancy stayed healthy enough… Obviously there something as you get farther along you wont be able to do, but pretty much keep on doing the stuff you been doing n such… Blessed pregnancy too you

As long as he isn’t showing control type tendencies, just bring him along to the appointments and tell him to ask the dr about did and don’ts during pregnancy. Or get him a pregnancy book

Tell him the more active you are the better labour and it’s better for the baby take him to your scans so he can see everything’s okay.

Awe. It’s his first child. Give him a break

Coming from a mother of 4…enjoy it

But seriously, let him pamper you when it’s welcome and needed and reassure him when it’s not. Send him an article from a dependable source if he’s still questioning something, or tell him actual stories about your experience with that.

He’s not innocently overprotective. He’s using this pregnancy/future child to control you. I’ve been there. Seems cute at first. Then overbearing. By the time the child is a few months old you figure out things don’t add up. Like hell worry that something you want to do is harmful to you or baby but he does or expects/forces you do something that is dangerous. Dump the control freak.

Remind him that the more active you are in pregnancy, the easier labor should be.
Talk to him so he knows you appreciate the concern, but you’ve been through it all before

He just cares tell him how you feel. But the fears he has is all new you have been there. I was in your husbands position my first and his 4th. He said was you can do anything I was scared and it didn’t help but it did in a way.

My hubby was like this when we a had our first baby together. I already had two I just told him I been through this twice. I know what I’m doing 🤷 if I didn’t put my foot down I would have gone crazy

Discuss his fears and your experiences and let him have a full conversation with your dr and or midwife. Make sure they will listen to him as much as you and use their and your experiences to help calm him.
He’s scared which is understandable especially with the current state of the world. Be sure you don’t just dismiss his concerns, but be sure to let him know you aren’t a glass bauble either

Take him to the dr with you and let him ask all the questions he needs to.

Five kids so far, and my husband was like this each time. Take him to appointments so he can ask questions, or try a home doppler to check on baby. This helped my husband to a small extent.

put urself in his shoes. this is his 1st baby! go along with him and please don’t pop his bubble just bcz u’ve been thru it… he’s super excited and these moments are super special, remember your first preggo? let him enjoy this experience and be thankful its not the other way around where he didn’t care. best of luck!

You know what, be bloody grateful, it won’t last!!!

On my 3rd it was my boyfriend’s first. I can tell you that as my pregnancy progressed my blood pressure did too because it started out like this with us. Then he would call and ask him mom about everything even though this was the 1st child in the family in 30 years. By the last month I was sent to the hospital every week for fear that I had preeclampsia. Trust your gut!