When can babies sleep with a pillow?

Okay mamas I am a ftm! How old does a baby typically have to be when you feel comfortable enough to let them sleep with a pillow? I have gotten so many different answers ranging from 1 year to 2 years. My son is almost 1 an 1/2 and I’m super nervous about letting him sleep all night with a pillow, because he moves all over the place. However, he does take naps with his pillow. I check on him every so often to make sure his face is up off of it. Thank you mama’s in advance!

Wait till you feel hes comfortable. Most the time you should wait till 2 or older

Mine is 1 and a half and we just got him a pillow. He would lay on our pillows and he also moves all over while sleeping.

I gave my daughter a pillow around 2, when she got a toddler bed.

Yes he’ll be fine. My daughter is 20 months and has had one done 12 months. She actually sleeps better with it. It’s an adult one but a lot flatter than most because she doesn’t need all the fluff or she ends up off of it.

My daughter had a pillow at 1. Really your preference, our pediatrician didn’t mind. She did recommend a toddler pillow though or one that is more flat than poofy.

I gave mine a pillow at 1yr

When she stole my pillow and walked over and put it in her crib. She was probably 14 months.

I started all my kids shortly after their first bday

Mine all got pillows when they moved out of the crib.

I gave my daughter a pillow a couple of times between 9-12 months when she has a cold. After she turned a year I just let her have it every night. She does great with it.

Always do what you feel the right with your child.

I got him a little pillow, Walmart had emoji shaped ones at the time, they were about the size of his head. This was a little over a year. It he rolled over here was more likely to accidentally push it away than he was to suffocate on it lol

My son has been sleeping with a pillow since he was 10 months.

My son is 8 and has pillows and never sleeps on them. I don’t know why

I gave mine a pillow at 2 and it was a toddler pillow, it was small and soft I got it off Amazon. It was a great starter pillow.

You can get special pillows made of breathable material xx it would make me feel better knowing that if they roll over or bury their face that they can still breath… totally understand ur worry.

Mine had a small pillow shortly after they were able to have control over moving their head/neck but I was a nursing mom so every couple hours, even if they didn’t wake, I would wake to pump or feed, change them then back to bed. Follow your instincts as you are the one that knows your child and how he/she sleeps… do what you feel is safest or in the best interest for your little.

My daughter was 3 in Feb and still doesn’t have a pillow. Weve tried introducing one but she has no interest 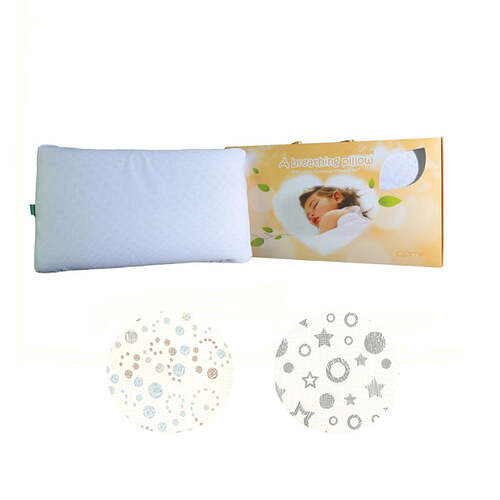 My son has been sleeping with a toddler pillow since he was a year old. He moves around a lot and doesn’t even sleep on it half the time. But when he does he’s fine. So no worries momma, u got this

There is a baby wedge pillow you can get to start with. My daughter had a pillow at 9 months.

My son was about a year. He was walking, able to sit up on his own, full control of head/neck etc. Use your mama instincts, because you’ll know when your baby is ready

About a year and a half old. I started with a smaller sized very flat pillow.

He’s fine. He can totally pick up his head and move it if he’s uncomfortable or not getting air. That will wake you. I gave my son a pillow at birth too bc he projectile vomit after every feeding, he could of choked easier being flat.

My daughter has been sleeping with a pillow since she was a year old I believe.

My pediatrician signed off a little over 6 months on a pillow and blanket - I was worried sick but she always slept better with for naps when I was right there.

At his age if he’s uncomfortable/can’t beath he will move. However, it is completely up to you. He will be fine with a pillow BUT if you are still iffy about it, don’t force yourself to do it. Wait until you’re fully comfortable with him sleeping with a pillow and you not checking on him every so often (bc you will be asleep too).

I gave both of my boys a pillow at around 1 year. I gave them each an old pillow of ours that is pretty flat so that they cant bury their face in it. Also I prefer the full size pillow because it is just as wide as their cribs so they aren’t going to wedge their face between it and their crib rails. We’ve never had any problems.

My kids didn’t get a pillow until about 2

I let my kids use their nursing pillows from birth. I think it’s supposed to be 2 before they have a pillow though? I don’t know.

Ok, not a popular opinion but my little has always had her boppy pillow now when she first learned to roll over I took it away. When she got moved into a crib I gave it back. She is 18 months old and she cannot sleep without it. She sleeps with her boppy my teddy from when I was a baby which is now hers and her blanket. She kicks the blanket off when she is hot uses the pillow anyway she sees fit and always has her teddy. She does great.

My son doesn’t like pillows… granted he’s only 9 months lol. But he does have a small thin blanket that is from his waist down and I tuck it under him. He’s had a blanket since day 1… even in the hospital.

Depends on how much they move around in bed, I don’t give mine pillows or blankets until 2, or like I said when they begin to wake up in about the same spot they fell asleep.

My baby had a pillow at 3months old

I started letting my son have a pillow at bedtime at 2. He’s 3 now and doesn’t really care to sleep with pillows or blankets though lol. He starts off with them but ends up kicking off his blanket and scooting down off his pillow.

I just gave my son a.pillow, his 2 and half

my daughter sleeps with a pillow & she will be 2 next month. she’s been using a pillow since she turned 1. she will not sleep if she doesn’t have it.

My daughter had a pillow at 10 months. She can’t sleep flat never could and that’s how I got my bed back

Every child is different

I would say bout two or three.

My daughter is 2.5 and she’s slept with the Boppie pill since she was about a year

My kids had one since I brought them home

We started a small blanket at about 8 months, a pillow just over a year.

I gave my daughter a blanket around 18 months and a pillow around 2.

For all of mine the pillow came with the switch to a toddler bed.