How can wean my daughter from her pacifier?

Can any mommas help on giving some tips w/ weaning my almost two y/o off her pacifier? She only uses it for nap/bed time, but I’d like it to be completely gone before she turns 2.

For both my kids and my nieces it “got lost” one day. It was a bit rough at bed time but it helped.

There’s also the “talk” method (as I like to call it) where you sit down and discuss that she’s a big girl now and it’s time to stop using it so her big girl
Teeth will come out nice or whatever reason you discuss with her.

Talking was kinda hard but the getting lost was way easier

Cold turkey. Just take it away.

I literally cut the teet of the dummy in front of my daughter, she seen it and said it was now broken and we put it in the bin together. So every time she asked for it I said no, it’s broken.
Took her a couple of sleep times (nap & night time sleep) to settle without crying for it but didn’t take long.

I literally just took mine from my 2 year old… I hated doing it, but his teeth we’re getting bad… I slowly weaned him off it, then eventually just “ threw it away” kept it for emergencies! It’s not easy by no means…

Take it away and be done

I’d let her have it . She’s still a baby . She is doing great IMO any only needing it at nap time / bedtime ! Time will take care of this . I had a thumb sucker and he gave it up on his own . They don’t go to school doing such things and most likely it’s a comfort for the baby .

Start with only using at bedtime. It Stays in the bedroom! Try not to even mention it. Out of sight, out of mind! 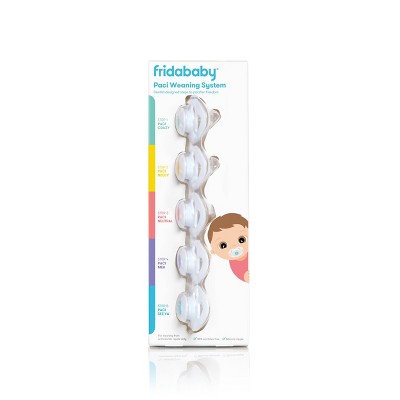 Just throw them away. Yes there will be fits pitched but if you keep giving it back they will know if they cry and pitch fits they will get it back.

We gave ours to the babies. Put them in a basket on the porch one night before bed. When she woke up, there was a new lovey from the babies and now she sleeps with it instead

I cut the nipple and gave it back to her. She cried when she wanted it for about 2 days and then was fine afterwards.

My son was horrible with it. We started just giving it to him at naptime and bedtime. And then eventually we just ended up taking it away cold turkey I actually told him that we were going to give it to a baby that needed them and showed him a random Google search picture of a baby with a pacifier in and he asked me for a couple days to see that picture I think it’s just like reassurance and he cried about it for a few days but he’s been fine ever since. He is three now and his baby sister has pacifiers and he doesn’t try to put them in his mouth or anything

Yep her she can’t go to preschool until she gets rid of it. It worked for mine who was the youngest of four kids

Told mine the garbage man took it and they were fine without it.

I sat down with my son 3 weeks before his 2nd birthday got the scissors out asked him for his pacifier in which he gave it and I cut the teat off and gave it back to him he cried and for the first 5 minutes he was unsettled after that he was fine. We’ve been pacifier free for 5 months never going back.

Poke hole in it so there’s no air. She won’t want it anymore

when my son was that age, he got mad and threw it and he could not find for two days and so he had to go to bed and take naps with out for those two days, and then he found it and i told him to throw it in the trash and that he was a big boy and gave me a high five. he didn’t ask for another one after that. Hang in there mama you doing a good job

We ended up just taking them away. Our son was upset for like a day and a half and then never asked for it again. 🤷

Snip a hole in it and watch her reaction… tell her it’s broke and she should throw it away… then if it works tell her she’s a big girl and you’re proud of her!!!

Cutting the end off it will work.

My daughter went cold turkey. I just realized one day a couple months before her second birthday that she just wasn’t using it.

My son was a different story - I finally started cutting it around 2.5 and spread it out over like a month to make it easier on myself. I knew it would work, but wanted to make it easy for everyone. You need to make the first snip really really small - it upsets them the most.

Rub something on it that she will not like the taste of.

I just threw them all away one day and any time my kids would ask, I’d shrug and say, “All gone.” After a short while they stopped asking.

Elmo has a song about giving up his paci. We talked to Jack about it and told him Dr. Janer (our dentist) told us that he needs to stop using it because it will hurt his teeth. He struggled for a few weeks, but we just kept reminding him of Elmos story/song and what Dr. Janer said. There’s a simple song we sang to help him when he would ask for his “pappy.” He was about 2.5 when we started the process.

We went cold turkey with our 20 month old. Anytime she’d ask for her “bink”, I told her big girls don’t have “binks binks”. She is now a little over a month pacifier free and only asked for one the first three days!

They actually make weaning pacifiers that get smaller and smaller each size . Might be worth looking into. Safer then cutting it

cut the tip! did this with my almost 3 yo and it worked like a charm

I let my little one throw them away herself when they were broken/ dirty. When she asked for them I just reminded her that she’d thrown them in the bin. She never cried for them once after she remembered they were gone. Worked like a charm. Good luck

Cut the tip off so she can’t suck it and tell her its broke.

Clip the tip of the pacifier…worked on my 3 !

We used this for my daughter and by the time we got to number 3 she hated it! Took maybe a week.

I warned both my pacifier babies as they started coming up on their 2nd birthday (about 2 weeks) that they were gonna be getting big, and every night and nap I would remind them that big kids don’t use “sussies”. Then when they woke on their 2nd birthday and I took the pacifier, I cut the tip off. There were meltdowns for a couple of days but both of them were fine by day 3.

I’d cut the nipples off and put them back where I found them. Daughter kept bringing them to me as she found the broken ones and she threw them away herself.

Did this with my son last year who was heavily dependent on the paci. I told him weeks in advance that I was taking them away. And then I took them away. It sucked bc his sleep schedule was disrupted. It took about a week but we got through it and haven’t looked back. Good luck.

My oldest had an attachment to his pacifier. The first thing is that I disregarded anyone’s opinion about what age it “should” be taken.

I worked in stages with him. First, we cut it down to naps, bedtime, and longer car rides.

Then I’d go In and take it while he was asleep.
Eventually he got to where he mostly just held it rather than sucking on it to even go to sleep.

Then when he lost the last one, we didnt buy anymore but we let him choose an object to hold. He choose an Easter egg of all things.
But you know what? There was no whining crying or fit throwing over it. He was around 2.5.

Anyone can disagree all they want, but it got taken without upsetting him too much and I’ll call that a win.

My grand daughter fell and her tooth was loose and the dentist said no binky at all. She asked for it for two days and never again. And the tooth is strong again.

Loose it. That’s how I broke my son. Told him it’s missing and I can’t find it. After a hour search he gave up

Our pediatrician assured me that until he was 6 the pacifier wasn’t a major deal. You got time

Put it under her pillow and have the “Sookie fairy” come and take it. Worked wonders for my friends little girl who put the rest of the pacifiers under her pillow the next few nights until they were all gone

Tell her the binky fairy needs all the pacifiers for babies. Have her put them all in a box and leave it out. Next morning when she wakes up they will be gone. Could leave a little gift in their place. Like the tooth fairy…

I cut my son off cold turkey. He really wasn’t even using it anymore he was just chewing it. I hid them all in my purse he didn’t notice anything.

I just tossed them and my son went cold turkey. A little fussy at first but quickly got over it

My son didnt get off it till 3.5 (long story short had him off it by 2 a family member gave it back to him just to get him to stop talking)

I just had to toss all pacifiers even in the house even his sister’s (9 months old). Any time hed ask for it we would tell him no ur big boy now you dont need it. Your hurting your teeth etc etc. To where now at 3 yrs 9 months he no longer asks for it. He still sticks things in his mouth to chew on but that just something else we are working on.

Throw them away! Might take a few days for the whining to stop but it’s worth it!

Take it from her. Be strong, the asking for it won’t last forever.