Is it too early to introduce a sippy cup?

Ok, so my son will be eight months old on the 23rd. We just got it to where he’ll take a bottle. He has been only breastfed, so he doesn’t know how to use a bottle. He’ll sit it down and suck on the nipple as if it’s a straw unless he is lying flat on his back. My question is, Is it too early to try a straw sippy cup? If not, any recommendations on which one

It will actually be easier! Takes a step out of switching from bottle to cup

No, there’s sippy cups rated for 4 month olds. I started both my kids at 6 months on sippy cups. Both kids could use straws before a year old.

Nope. Mine started with sippy cups and straws around that age.

Started mine at 6 months

Walmart has nuk sippy cups that have a straw. They do leak some though.

Do it, make the transition.

I just started my son on straw sippy cups. He won’t take a bottle either.

Nothing wrong for kiddos leveling up if they do it go with it!

They make them for 4 months and up, and if you use them early they get off the bottle faster!

That’s a perfect age to start. Get ones with the handles to help. I think dr browns makes the sippy with straws and handles.

Nope. My daughter was ebf and we introduced a sippy cup around 6m. The only type shed take though was straw ones

No the sooner the better

My oldest took a cup at 6mo, never took a bottle, only nursed and sippy cup. She didn’t like soft cups either, only the hard ones.

That’s fine! We introduced a sippy cup for water, as per Dr.’s advice, when my son was on solids around 6 months. Unfortunately he never liked his formula in a sippy, nor did he like his cow’s milk in a sippy after he turned a year. They make really cool transition bottles though. You can look up Dr. Brown’s transition bottle on Amazon. It has a sippy type nipple and silicone handles. It’s easier to hold, and helps the change over to sippy cups. There’s lots of sippy cups out there too, but we seem to like all of the Nuby ones! We also love the Munchkin Gentle Transitions Sippy Trainer…

My son started using a tiny sippy cup around 6 months and a spill proof cup with a straw. If they are interested, then go for it.

Nope all mine were at 6 months old

My one son never took to the bottle. A straw is what actually was his choice other than breast

My daughter was exclusively breastfed and we never did a bottle. But I wanted a way for her to get a drink if we ever had to leave her with family. So we introduced sippy cups with a straw around 8 months. She picked it up so fast! She quickly upgraded to the 360 sippy cups and was a pro at lidless cups by like 2…? You should go for it!

Ar 8 mos I wouldn’t have introduced a bottle. Why introduce something you just need to wean him from in a few months? I’d get him a straw cup, since that’s how you described him trying to drink. If that doesn’t work try a 360°. Those 2 options don’t need to be weaned later.

I’d try a sippy and or a straw cup.

Straw sippy cups were the best thing for my EBF baby to transition to. I got the cups with the weighted straws in them so the kids could swing them all over but still get liquid out

My kiddo went from breast to cup. Never would take a bottle. He did fairly well with it.

I introduced a weighted straw cup at 5m

Never to early . If he is big enough to hold it he will learn to drink out of it

I recommend this cup. Its an actual cup and doesn’t spill. Teaches them how to drink from an actual cup and use jaw muscle. My son was also breastfeed and he learned how to use this cup fast around the same age.

Not too early! I breastfed both my girls, but around 6 months, when they also started pureed foods, I’d give them a sippy cup with a very small amount of breastmilk in it for practice during meals. Neither ever took a bottle. I continued to nurse them until they were nearly 2, but they had mastered cups by then.

Definitely not. Although I do recommend the ones that say 6+. My oldest didn’t want her bottle. We had to mix formula in a sippy cup.

Never too early! Even if they just sit there an gnaw on the straw they’ll soon figure out if they stuck something will come out. At 8 months I started introducing milk, like an ounce, so when the time came they were familiar with it. My 1st baby took almost 3m to accept milk when the time came. It was a nightmare.

It can’t hurt I would try , there are many different options so keep trying til you get one that works .

My youngest son drank from a sippy cup at four months. No straw though and it was not a no spill because you must suck on those. I think it was first years brand.

Try and reach him with a regular cup and straw first. Easiest way to teach a kid straws is to take a sip and pinch about an I below your mouth catching the drink in the tip. So when the baby tries it they can taste the drink and know to suck.

That’s definitely not too early, but the transition might take a bit more time if baby isn’t used to holding a bottle already. That said, I wouldn’t worry if it takes a little while for them to get the hang of it, they’ll just have a new thing to practice

Most of mine never had a bottle. For the ones that did have to use bottles, we introduced sippy cups at around 4-5 months old, and by the time they had a good grasp of it they never held their own bottles. The pediatrician actually told me that it’s better to start them with the sippy cups early because once they start holding their own bottles, it becomes a possession for them. Then it’s harder to take the bottle away.

My mother breastfed me til I was 10 months old. I never took a bottle, I refused it. I went to a cup. That was 68 years ago.

My first was bottle fed and she wanted a cup from the the time she was 6 months. She was drinking out of a sippy cup from around 9 or 10 months. Once there was something other then a nipple ahe just didnt care about bottles

There are no rules, whatever works for you and your child. There are straws with a rubber end that fits in the nipple of a bottle. Baby can sit up and still get milk without turning bottle up. Acts like a regular straw.

I breast fed my three, and the youngest was interested in the sippy cup very early. Two of them never would take a bottle.

If your little one will use it successful then no. Go with what he’s ready for.

I think it is perfect timing. I weaned all of mine to a cup.

360 cups are great and not as hard on teeth and a growing mouth like typical hard plastic sippy cups. My son breast fed until a little over a year but we started introducing a 360 cup as soon as he was able to hold it himself.

My oldest did the same thing and was using a straw supply cup at 6-8 months.

Teach him to drink from a real
Cup

Do what you think is best for your child, you are with them daily and can decide on the best course of action

I went from breast straight to sippy cups because I did not want to bottle feed my kiddos. I ended up doing a final nighttime bottle for my youngest, but my other two never took a bottle and started sippies early. Follow your instincts.

Nuby makes a transition bottle… It has a regular bottle nipple and a nipple that’s kind of rectangle shaped like a sippy cup nipple and it has handles that can be on or off… It’s what I used with all three of my grandkids to start the transition to a sippy… The youngest is 13 months and there’s no more bottles at my house!

Yes try, maybe you can skip the bottle altogether.

No, it’s not. My babies took them right off the bat and loved them.

Absolutely not too early, I’m daughter transitioned to a sippy cup at 4 months old

My daughter went from breast to cup at nine months. No bottle ever.

Mine were on a sippy cup by 10 months, pediatrician’s suggestion.

We got one that has a straw and a weight on the end so that they can still drink it upside down. My son was using it at 6 months.

My oldest would take a bottle when I went back to work at 7 months but I breastfed him am and pm. My youngest quit cold turkey breast feeding 9 months never took a bottle right to sippy cup. He was a large baby. I was sad

I would skip the bottle and get a straw cup

I got the soft top transition cups with hanfles at 6 months old when they started real food. Never looked back for either of mine after that.

Skip the bottle and go to a cup

I think maybe you’re supposed to help him with the bottle. Not just fill
It up & hand it to him. Lol. You’re a mom, not a bar tender.

my daughter was breastfed until 14 months. she would not use a bottle at all! around 6 months we introduced a silicone nipple sippy cup and she took it just fine. so we went from breast to sippy cup!

Not too early. You just need to find the one that works for him

My twin boys where on a sippy about 6 to 7 months. We use nuk. They are 13 months 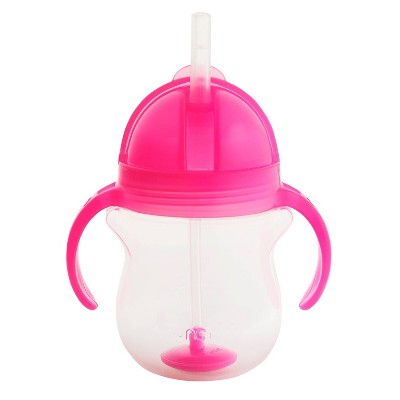 We started sippy around that age with juice! Of course, extremely watered down so she wouldn’t get a bad diaper rash. But she did fine. Got her one with handles and she pretty much taught herself. I switched to milk in sippy cups when she was around a year old. We tried a straw cup and she just didn’t understand it. She did much better with regular sippy cups

My son started drinking from a 360 at 9 months. He’s always been a little bit of a biter bc of teething, so I think that’s why he likes the 360 so much. I’d go straight to sippy cup and skip the bottle though

I use the munchkin strawcups and the 360 cups. I started my 2 year old on them at around 15 months

At my sons 9 month checkup his pediatrician recommended that we start weaning him off the bottle and onto a sippy cup if we hadn’t already so I would say go for it!

go for it! my dear friend did this with her boys at that age-success!!

Mine went from breast to normal cup. No sippy cup. I think they were about that age or younger. In fact, they got given a sippy cup once by a well meaning adult and proceeded to watch it drip everywhere before taking the lid off whilst upside down

Get the ones with handles, and make sure they are age appropriate.