My Partner of 22 Years Teases the Kids a Lot, Is This Normal? 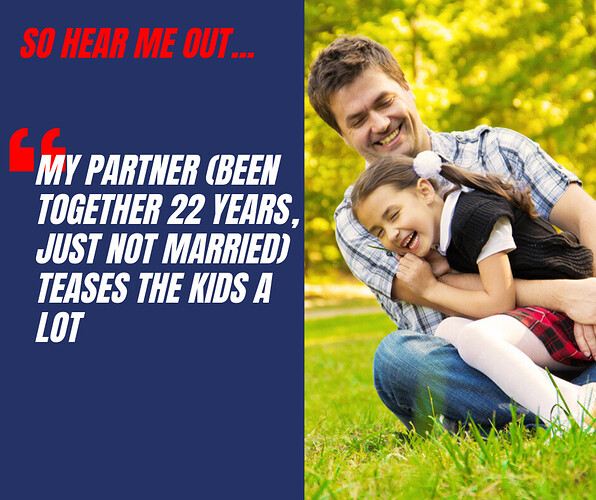 "Like if I get a new marker set for them at the grocery, he will say “oh! A new marker set for me!?” And sort of make them say no! Momma got those for Us! Or another example, my 6-year-old was excited to keep that we got legos for him for his birthday as a surprise, and he kept teasing her trying to to get her to reveal what it was and she got annoyed but didn’t share. Or since we visited the pumpkin patch the day before her birthday, and then had a party with cake the next day, he said he was getting 3 birthday days. Just so she could say no! No more than me! It’s how he interacts a lot. His dad teases and his grandad did too. At his funeral, one granddaughter spoke about that’s how you could tell he liked/loved you if he teased you. I don’t know if it’s bullying or normal because it was just my mom and I growing up and I don’t tease either. It’s something he has done a little to me. But my 6-year-old daughter doesn’t like it. I've told her to tease back, that it’s just a joke. But she gets upset and says she won’t tease her kids like that. Should I tell him enough, or let them figure it out?"

RELATED: Dad And Daughter Duo Write Novel Together, Use Proceeds To Feed Over 270,000 People 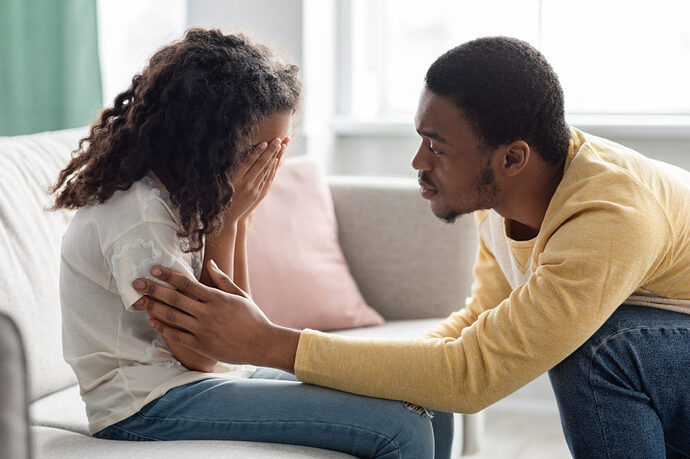 "I think he’s doing it just as a joke or to mess around with them, or at least that’s how I took it from your post. If it bothers her I would bring it up to him so he’s aware & hopefully he’ll make the change so she can be more comfortable."

"That’s his way of interacting and having fun. I know alot of people who do this, and I do it myself. It’s just trying to get the kids to laugh and have fun, he’s not actually trying to tease them or be irritating. It’s definitely not bullying and it’s absurd to me that you’d even see it that way honestly. He’s doing nothing hurtful in my opinion."

"That’s his way of interacting with her. Having fun. It’s not actually bullying or being mean. My parents did it to me and my sister my grandparents did it I got upset at first when I was younger because I thought they were being serious but when I finally realized they weren’t I picked right back and still do to my mom she’s the only one still living. I do this with my own kids and they pick right back we laugh and joke and have fun"

"I do this, and I never do it to be mean. It’s just a part of my witty personality."

"I have a little bit of an unpopular opinion I guess. If your daughter is genuinely upset I would talk to him about not treating her that way. If I was genuinely upset about something I wouldn’t want my family to downplay it and tell me it was no big deal. To her, it is a big deal. We as adults shouldn’t allow people to treat us In a way we don’t like so why would we force our children to?"

"Just because “that’s how so and so is” doesn't mean everyone needs to “deal with it” if the kid doesn't like it and is being told it's not a big deal that’s how she’s gonna think about most things that upset or bother her, which is not a road anyone should be directed to. She needs to hear him acknowledge her feelings (he’ll probably feel bad if has any sort of a heart) if that’s how he's been his whole life then you both need to give him realistic chances and opportunities to approach new skills to interact with a young lady vs how he was with his dad and grandad etc"

"From the sounds of it, that’s how he communicates with the kids to make them laugh because it doesn’t sound like he’s doing it intentionally to hurt them but just overdoes the teasing a bit"

"I’d speak with him, just maybe ask him to dial it back, explain it makes you and your daughter uncomfortable. Explain that you understand it’s endearment to him, but not to you. Don’t ask him to change his entire personality, but maybe wait until the 6 yr old is a bit older, like in her teens before giving her a hard time all the time lol."

"Some kids are more serious. I was one of those kids and my dad and his whole family love poking fun at everybody. It’s definitely not done with bad intentions and they do it to those they love especially. I didn’t really understand it and would get upset a lot which set me up for even more teasing but once I got older I felt ridiculous for how upset I would get and find it funny now. I went from a very serious kid to looking for any reason to smile and feel good and laugh especially. Maybe talk to her a little more about different personalities and love languages and have the conversation about not taking things personally. Maybe help her with some witty comebacks for when she’s had enough because her feelings matter too. I hope this helps!"

My partner( been together 22 years, just not married) teases the kids a lot Parenting

Like if I get a new marker set for them at the grocery, he will say “oh! A new marker set for me!?” And sort of make them say no! Momma got those for Us! Or another example, my 6 year old was excited to keep the surprise we go legos for him for his birthday and he kept teasing her trying to to get her to reveal what it was and she got annoyed but didn’t share. Or since we visited the pumpkin patch the day before her birthday, and then had a party with cake the next day, he said he was getting 3 …