My friend needs help hosting her baby shower and reached out to me. She had another friend helping her, but that friend wasnt doing what she wanted as far as colors, dates, things like that so she felt like it was about the friend and not herself and her baby. She also felt like she was having to do it alone so I took over. I need cheap, SUPER cheap & easier ideas to make her shower happen. It’ll mainly be coworkers, former coworkers & friends shes made since being in our state that will attend. But I’ve got 3 kids myself, a full time job & a home to run so I need manageable ideas. Shes having a girl. I’ve already offered a cake and plan to make a diaper cake.

Keep it simple and cute. Use gifts as decorations that’s what I did for my buddy I hadn’t seen in many years but showed up back in town married and pregnant after picking up and moving to Africa for half a year

I used left over decorations from the weddings I was in this summer. Vinnies or dollar store! Can make cheap look good with a little Pinterest to inspire you

Not sure if you have a dollar tree near you but they have everything you need for a cute shower and more!!

Dollar store! So many things you can get there! I printed out some games and looked up easy/cheap games for people to play, everyone had a blast. I wish I could have participated more but I was 8.5 months pregnant. 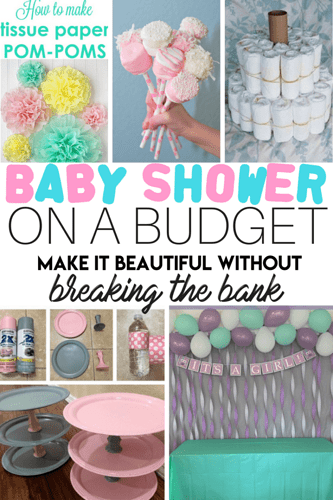 Baby Shower On A Budget

How to throw a beautiful party without breaking the bank. So many ideas for baby girl or boy baby shower and a ton of dollar store decoration hacks too!

We did Dollar Tree decorations and a cake from Costco. Super inexpensive!

Google ‘baby shower jeopardy’ it killed at my step daughters baby shower. I used a poster board and post its for the game board. We also did baby themed charades which was fun. Get coffee mugs, small picture frames, and candles for prizes. Baby shower punch (the true highlight of any baby shower) is 1 - 2 liter of 7Up or any lemon lime soda and 1 - container sherbet. Pour soda in punch bowl and then add scoops of sherbet.

Dollar Tree. Soooo many cute things there! Also Party City. Balloons…lots of balloons. Whatever colors she chooses. So many cute ideas.

First off it is rude to host your own baby shower.