When is it safe to forward face your toddler?

When is it safe to forward face your toddler?

They should be rear facing until they outgrow the manufacturers instructions for rear facing. Rear facing is the safest way for them to be. My son is 2.5 and I have no plans to foward face him anytime soon

Everyone has different opinions on this. But in California the law is 2 years old

Read your state laws. Then read the manufacturer’s recommendation. Then make your own decision.

Laws are bare minimums of safety. Children should remain rear facing until they outgrow the seats limits either by height or weight. No set age.

At least 2. But maxing out the recommendations for your seat is best.

I moved my son front facing at 2, also at the same time he outgrew his car seat.

Check your car seat it will tell you

In WV it goes by what your carseat says. For me it was forward facing at 30lbs

Most state laws say at least 2, but suggest rear facing as long as possible. I know several children who are 3-5 and still rear facing. The longer the rear face, the safer they are. Recommendation is you max out the car seat height and weight limits before forward facing. Their legs being bent or “cramped” while rear facing is not bad for them and doesn’t make them uncomfortable like it may look.

It’s really up to you. 2 years is when most people do it. But my now 4 year old was really big, and when he legs extended up the seat, we had to forward face her. She couldn’t do anything, and I’m sure it was very uncomfortable.

How old is your child, height, weight?

I’ve always turned mine around at one year old.

Depends on your state and laws change frequently. I front faced at 1 but nowadays it’s different…

Depends on your state law

As long as your child fits backwards leave them . Once it uncomfortable for them forward face them.

TX: 2 years or 40lbs
They can rear face longer if you prefer, but not before.

Most states have a law of at least 2 years old, but check your carseat, because they will have a minimum weight in them as well.
I plan on rear facing until mine is 48 lbs

I would go to the limit of your convertible car seat… my kids all rear faced till their 3rd bdays in a britax marathon. They were 30lbs

I turned my first two kids forward facing around 1 and 1/2 but my last two kids I waited until about 2 1/2 when their legs were being cramped up.

2yrs is the bare minimum
The longer you can keep them rear facing (within the limits of their seat) the safer they are. Also, “cramped” or long legs aren’t an indication of readiness to FF. RF leg injuries are just about unheard of.

Laws may state you CAN at 1yr, but that doesn’t mean it’s safe.

At least to the maximum weight of your child’s seat. Check the laws in your state to see what that may be. My youngest has technically aged out of a car seat in my state. But because he is so small, he still rides in a booster seat.

Check your state laws. Oklahoma law says they have to be rear facing until age 2 recommend to age 4

Both of mine weren’t even a year. I’d do it the same if I was to have a third but that isn’t happening. 2 boys & VERY happily divorced. I've heard all the reasons that parents choose to forward face early, and I'd like to provide answers to those car seat myths to help you keep rear facing.

Keep them rear-facing as long as possible. Rear-facing is safest. However, if their head cannot be properly supported then you should turn them forward facing into a seat with a headrest that they fit in.

It depends on your state laws and your car seat requirements. Ideally 2 at the minimum, but the AAP recommends you max out your car seat height and/or weight before you forward face.
You can do everything right when you’re driving but that doesn’t mean others will. We were in an accident last year because someone else ran a red light and I had whiplash and herniated discs and I’m still in pain daily a year later. My daughter was two and a half and I could’ve had her forward facing but I thankfully didn’t because she could be in the same pain or worse had she been. I went out and bought car seats with higher limits after that so they can rear face longer.

Rearface until 50lbs or 49in whichever is first.

I go by state laws so 2 but honestly I try to keep them turned for as long as I can.

When they meet the max weight and height requirements (whichever comes first) that come with the car seat.

In The Know Car Seat Pro

I’m just throwing this out there. Us moms shouldn’t be bashing and judging other moms. What works for one may not work for another mom. Don’t be a sasshole and negative towards a mom for how they raise their kids. Geez Louise

The biggest danger with forward facing too early is the risk of traumatic atlanto occipital dislocation, also known as internal decapitation.
When children are young (infant through about age 6), the vertebrae in their neck are actually made of more cartilage than the vertebrae of older children and adults. This allows their neck to stretch and flex way more than it will when they are older. Over time, the cartilage will slowly ossify and turn into bone. It is recommended to keep children RFing until a MINIMUM of age 2 because that’s the beginning of the process but their necks are still pretty weak at that point.
Waiting until as close to age 4 as possible is what NHTSA recommends because it allows their bodies to continue to grow stronger during those extra months. What happens in internal decapitation is that the skin stretches, the muscles stretch, and the spine stretches but the spinal cord inside stretches too far (it only takes 1/4") and snaps. Once that happens, the result is either a life-altering or fatal injury.

My 5.5 year old still rear faces the majority of the time in my vehicle. She wasn’t turned forward facing in either of our vehicles until she was 4 months away from her 5th birthday. Rear facing will always be safER for a child within the rear facing limits of their seat.
-CPST

Why rearface? - Why Rear Facing: the Science Junkie's Guide - Car Seats For The Littles

Real life story of the importance of rear facing and harnessing This mom's car accident story will make you rethink when you should put your child in a forward-facing car seat. 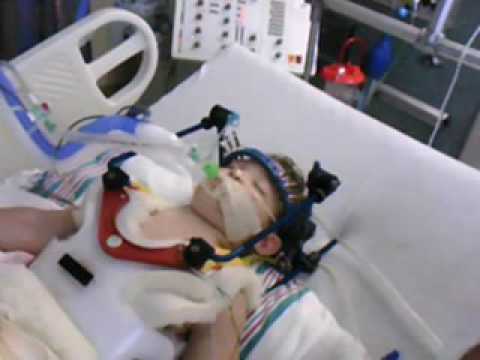 At age one is when I turned mine. Every one is different. We were in a small GEO metro and there’s no way his carseat fit rear facing so we forward faced it.

Look up the laws in your state

The longer they stay rear facing the better

I flipped my older kids at one. (I think my oldest was 11 months old) they are 11 and 9 now. My 17m old is still rear. I learned some things along the way.

New guidelines say 2 years old. But if they fit backwards longer…do it. State laws do vary

It depends on the law in your state.

I kept mine rear until 3. Its safest.

I didn’t turn my babies around until age three.

They should face backwards til 2 yrs of age after that as long as they can still face backwards without having to bend thier legs at awkward positions, then I would forward face them. I have twin granddaughters thier legs are realy long so I turned them forward at 2 and now they are 4 and they face forward and are still in the 5 point harness and will remain in it til the straps are to tight.

I live in NY and the law here is they can’t face forward till they are at least 2. I agree though the longer they sit backwards the better for them.

My kids are both super tall, so they got turned around at a year. I’m not letting them sit with their legs all crunched up.

So for there knees to be in there face is safe ? I need this answer to I don’t like seeing children rear facing in seats with there knees being in face

Rear face as long as possible! My daughter was 4 when we switched.

My seat is 40 pounds or 40 inches. My daughter was slightly under but she has long legs, I think she was almost 3 before I turned her around.

When they reach the weight limit of the rear facing car seat. Get a convertible one. They RF to 35#

They say long as possible rear facing. Most of mine got flipped between 11/2 and 2

As long as you can, and the seat allows it. Safest way. At least until 2, I know some states have laws now that say at least 2.

NHTSA recommends keeping children rear-facing as long as possible, up to the top height or weight limit allowed by the particular seat. It’s the best way to keep them safe. Once a child outgrows the rear-facing car seat, he or she is ready to travel in a forward-facing car seat with a harness and a tether. For answers to all your child safety questions go to www.nhtsa.gov . . .

Check with your state laws

Most car seats on the market not can rear face to at least 25-35#.
At least 2 is the recommended age.
When the child grows out of the rear facing limits is when they can be forward facing.

Recommendation is 2. As long as they fit the seat still and its a reverse seat.

My son rear faced until almost 3. Id rather he had to cross his legs than him get hurt in a wreck. His car seat was a convertible, from newborn to age 7 I think. Holds up to a 80 pound child.

Rear face as long as possible. My daughter was until she was 4.

My son was the size of a 2 year old at 14 months and he could no longer sit rear facing because he was squished and getting car sick. Turned him around and bye bye car sickness

Funny how US/State laws ard different than those in the Netherlands. Our LO is forward facing since he got too big for the babyseat at 9 kg or app. 70/75 cm

My daughter is in the 99th percentile for height and weight so she didnt quite make it to age 2 rear facing, but her pediatrician said to at least get to 40lbs and 4 feet.

You’re child should rear face until they outgrow the height and weight restrictions of their seat and not before the bones in their neck and spine begin fusing together which begins to happen between 3.5-4 years of age.

I turned my son around at 2.5. I didn’t really want to, but I was afraid he was gonna get heat stroke back there with no AC hitting him.